After a three year absence from the shelves Tesco is exclusively releasing a new range of Action Man toys that are hotly tipped to be the biggest selling toy this Christmas. The new Action Man continues the extreme sports theme of the later releases from 2005 and 2006 with prices starting from £5 for the Action Man Global Mission Action Figure, through to larger figures with accessories such as the Action Man Desert MTX (motor-cross bike) which is priced at £20 and includes an Action Man figure and desert MTX model with motor-rev sounds.

The military themed equipment is no more (with the HM Armed Forces toys covering that part of the market) but new Action Man still comes with guns.

David Smith, editor of toy news website ToyTalk, says it’s great to see Action Man back on the shelves. ”Even though he’s now been honourably discharged from the armed forces, he remains an iconic brand and has new battles to fight to protect the environment,” he adds. 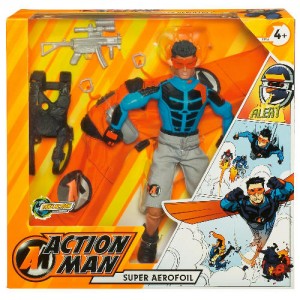 All the figures are currently half price at Tesco Direct and available at larger Tesco Express and Tesco stores.